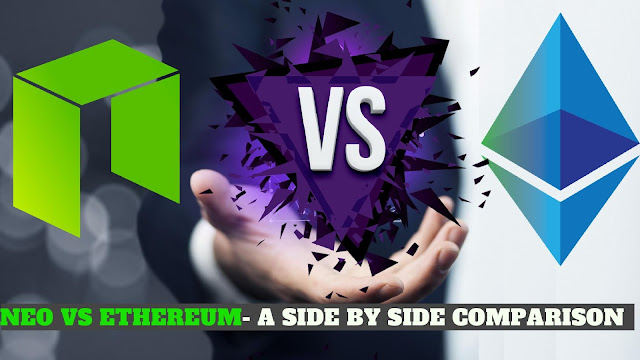 What exactly are they?

Ethereum is the crowning jewel of the decentralization movement going on. More than 90% of the decentralized applications and smart contracts are hosted on Ethereum. The perils of not having any third party interferences, fraud or censorship has made the platform popular among the developers within a very short span of time.

NEO was deemed as “Ethereum of China” by the blockchain community and is an intelligent economic network. The platform enables asset digitization, digital identity system, and smart contract development. Within 2 years of its launch, NEO has garnered considerable attention from developers.

In this blog, we shall pit them against each other and get to a verdict at the end.

How much are they alike?

Both of them accomplished Turing Completeness.

The blockchains are fueled by crypto assets, namely GAS in NEO and Ether in Ethereum.

The community support is tremendous for both of the projects.

NEO is backed by the Chinese government and other organizations like WINGS, Alibaba and other Microsoft like giants. This accounts for the huge popularity of NEO in China. Ethereum does not have this kind of support from any nation’s government but is backed by EEA - Enterprise Ethereum Alliance. This itself showcases the popularity and success of Ethereum on the world's stage.

Ethereum uses Proof of Work mechanism for obtaining consensus. NEO uses a delegated Byzantine Fault-Tolerant Consensus, otherwise known as dBFT, which is an improved form of proof-of-stake and more energy efficient. Though this slightly favors NEO over ethereum, we can expect Ethereum to make this transition soon.
Meanwhile, you can have a quick glance about Proof of stake coins (POS )coins

The smart contracts and DApps is written and compiled in C# and Java in NEO blockchain. It is expected that developers can write in Python and Go in the future. With this advent, all entry barriers will get eliminated as far as NEO is concerned.

The developer to learn a new language called Solidity if s/he wants to write smart contracts and DApps in Ethereum.

NEO is from China and not much is known about how it is catering to the audience who prefer English. On the other hand, Ethereum has grown into a global enterprise and caters to an international audience who reads English.

Currently, NEO handles 10,000 transactions every second while Ethereum can handle only 15 transactions per second. This can be considered the biggest advantage of NEO over Ethereum. The latter will buck up and solve this issue since they are working on the scalability.

A quantum computer has the ability to hack the cryptographic math on which the blockchains are based. Ethereum is not quantum proof and so is every other cryptocurrency blockchain. NEO claims to be an exception to this flaw and presents itself as quantum computer-proof. The developers claim to have developed an anti-quantum mechanism called NeoQS.

Ethereum is well positioned in the market in terms of technological aspects whereas NEO has a long way to go if it wants to position itself as a rival to Ethereum.

Having said that, we must also take into account that both of them are relatively new projects and need to stick onto their core promises to get a foothold in the market in the long run.